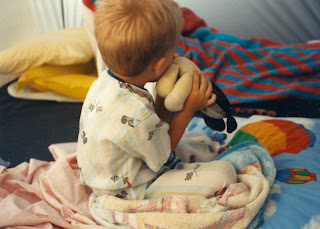 It has occurred to me that I share so much information about myself now... maybe I should share a little more about the rest of my world.  So what I will do is periodically include a photo (or maybe 2 or 3, we'll see) from the past and tell you something about each photo.  So this is the first photo I will share.

This is my middle son, and this is his favorite photo of himself.  (Kind of funny to some people because you can't even see his face.  But it has also always been a very favorite of mine.)  When he was a senior in high school and it was time to work on his Senior Page for his yearbook, this was the photo he wanted in the middle of the page, with everything else worked around it.  In this photo I am at the beach with my three children and my brother and sister-in-law (at that time they were just dating, though).  It was a weekend in May and we were at the Myrtle Beach for the weekend - and we were camping in a tent!  Can you imagine the fun? Three kids ages 5 and under in a tent?  My daughter was about 17 months old and she kept trying to run off to the bath-house.  It was terribly frustrating.  This photo was taken with whatever little 35 mm film camera I had at the time - but it was a quiet moment in the early morning, and he was so sweet!  This child was the only one of my kids who sucked his thumb - and it was about a year later before I realized that he only sucked his thumb when he was holding this Mickey Mouse.  So Mickey Mouse had to move into my room then, and Tyler only had visitation.

I would love to hear your comments...and if you don't want to write them here, you can always send me an email at donnakay@photographybydonnakay.com.  Another photo will be shared soon!

Thanks for reading!
Posted by Unknown at 8:05 PM